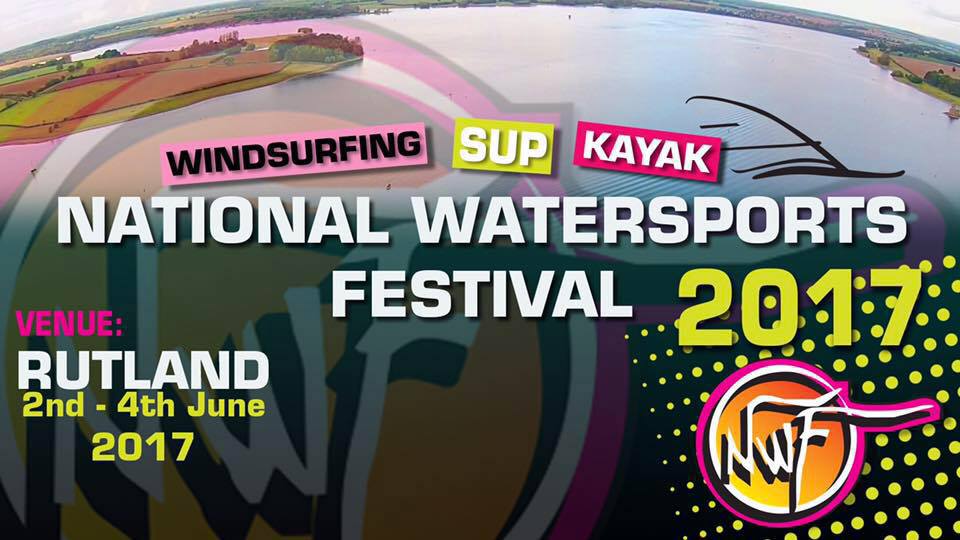 H2 OMG!
There is only a MONTH to go to the watersports event of the year! The NWF will take place on 2-4th June 2017 at Rutland Water.
Online entry is open – and there is even a price reduction on last year, since the infrastructure is already in place at the amazing new venue, Rutland Water.
A weekend at Glastonbury will cost you £243 this year. The NWF is just £70 for a full weekend of non-stop entertainment and watery fun – and includes parking and launch fees, which are normally paid!
If all you want to do is party, tickets are just £25 for both nights, with live bands, spectacular floodlit freestyle displays and an aerial firework display from a glider team who performed for the Queen’s 90th birthday.
Booking tickets is essential. Don’t miss out on the best opportunity to get together with your mates, spend time with your family and join others who share your passion! Get your tickets NOW on www.nationalwatersportsfestival.com

CHOOSE YOUR WEAPON – WHATEVER THE WIND DOES!
There’s only oneNWF – and it’s the only multi-disciplinary watersports festival that there is, incorporating both windsurfing and SUP.
That means that any way the wind blows, you can still take part!
If the wind is up – enter the races on your windsurfer. If the wind is light, why not earn your points on a SUP?
If you haven’t tried ‘THE OTHER ONE’ – there are free taster sessions in both windsurfing and SUP and lots of fun SUP activities where you can earn points for your team, such as – SUP Polo, SUP Tug o’ War – or relax with SUP Yoga.
At the NWF, you can join in whatever the wind does!

TEAM15 AT THE NATIONAL WATERSPORTS FESTIVAL
Sam Ross, RYA National and Zone Squad Coach, will be leading a team of coaches who will run a skills clinic for under 16s, followed by a Super Cross Race to put the new found skills into action!
There are 18 places available for each clinic, however young windsurfers can join in the racing even if they have not taken part in the clinic.
Entry is open to all windsurfers aged under 16 who have completed RYA 1 Windsurfing or equivalent. Windsurfers will need to provide their own kit and need to arrive rigged and ready for the start of their Clinic.

NEW SPONSOR – THE GRAINSTORE; AWARD WINNING LOCAL BEERS
The legendary Friday and Saturday night parties will be managed by The Grainstore, a local brewery who has come onside as a supporting sponsor. You will have the chance to try out award winning permanent and seasonal special ales, such as Red Kite, Rutland Panther and Rutland Beast, as well a range of well-balanced ciders, all made from British apples.

FLYING FIREWORKS
Going up in smoke and down in flames… The NWF Night Events have always been spectacular and 2017 will be no exception.
AeroSparx is coming to the NWF! With their new sponsor, the national outdoor store BLACKS, AeroSparx is the only pyrotechnic glider team in the UK licenced to fly at night. AeroSparx performed a spectacular, aerial firework display on the One Show to honour the Queen on her 90th Birthday and will be performing at the NWF just before dusk on Saturday night. You can get a taste of what is in store at https://www.youtube.com/watch?v=DKLo6l9P3Mg&feature=youtu.be but even that won’t prepare you for the wonder of two gliders carving graceful aerobatics through the night sky, with wingtip pyrotechnics and two fuselages, each covered with 12,000 LED lenses, reflecting from the still, dark surface of Rutland Water!