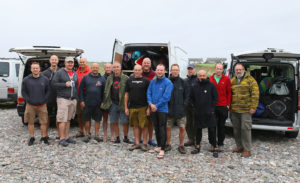 The format pretty much followed that of the previous trip, with one or two tweaks, having learned a few things from last time. The main change was to wait till later in the year in the hope of having better winds. However, as things turned out, be careful what you wish for! We set off with a forecast littered with extreme winds, causing some of us enough concern to leave our bigger sails behind. It also turned out that our fears were shared by the ferry operator too! We set off on a Tuesday night, planning to return the following Monday morning, so again having five full days on the island. So far this was pretty much a repeat performance of last time although we did make the journey slightly quicker by having an upgrade on the mini-bus. In addition to not having a 60mph limiter, this baby came with heated seats and Bluetooth which allowed the drivers to sync their music collections. In hindsight, Gorillaz D- sides was possibly not to everyone’s taste.

We arrived at the ferry terminal at about 4.30am and managed a couple of hours sleep in the vehicles before embarking on the ferry and a having a couple more hours once we were on board. After a ‘healthy’ Scottish breakfast we arrived on Tiree and had a drive around the island so that the old hands could show the newbees the best bays to sail from. We were staying at the Millhouse Hostel, the same as on our last visit, so we once again split into snoring and non-snoring groups. This turned out to be rather a waste of time when it was discovered the hard way that “non-snorer” Nathan was the loudest of the lot. Thank heavens for earplugs!

Cliff takes his sail for a walk along Gott Bay

All in all though we all got on very well, with quite a bit of banter and joshing, no-one being spared. Andy Jameson had the catering all very well organised, the hostel kitchen facilities were well able to cope with cooking for 14 people. After unloading all our personal belongings and the food we headed off to Gott Bay for an afternoon session in improving winds. On Thursday the wind was blowing in the high 20’s and gusting a fair bit more. There was also a lot more swell, which made the sailing conditions a bit more challenging for some members of the group. However, Gott Bay is probably the safest bay on the island and the worst scenario is that you end hitting the beach more down-wind from where you would like to be. On Friday there was even more wind with gusts expected to reach 50+ mph later in the day. The squad therefore decided to split up into those who fancied their chances in the waves at Crossapol and those who preferred the flatter water of Gott Bay. Later in the day with the winds steadily increasing some went to Loch Bhasapoll just spitting distance from the hostel. The water here is quite shallow and very safe for beginners. 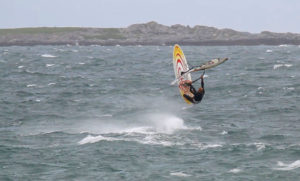 By the end of the day even the most experienced ended up here and with winds gusting over 50mph everyone had their hands full. Some found this prospect just too much hassle so set off for more land based activities. 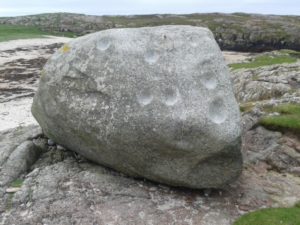 There is a lot more to Tiree than just windsurfing as it has a history of human occupation going back thousands of years. One of the most famous artefacts on the island is the Ringing Stone, an ice age erratic from Rhum deposited on the north coast. Around 2500BC the locals took it upon themselves to carve 53 cup shapes into the rock for reasons not fully understood. The information board mentioned fertility rites (best not go there). 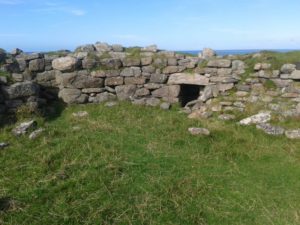 A couple miles down the coast from the Ringing Stone, near to the village of Vaul, there are the remains of a Broach, a type of fortified dwelling, dating back to around 100BC. A few hundred yards from this is an iron age hill fort. 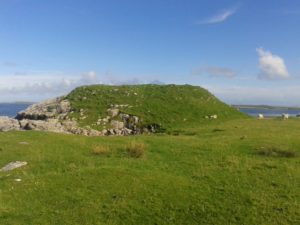 On Saturday the wind had dropped, the sun was out so conditions were perfect for blasting on Gott Bay, although there were some who preferred the more wavy conditions at Crossapol. By the end of the day, there were a lot of very tired people, some with bairly the strength to lift a pint of Triple Hop to their lips in the Tiree Lodge Hotel.

Sunday proved to be even more wet and windy than the Friday, so it was either hang gliding on the Loch or on with the walking boots and Gortex again. This time we chose to explore the coastline behind Beinn Hough, one of the more isolated parts of the island. 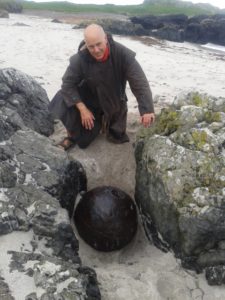 This is made up of a series of sandy bays and rocky beaches and is also the home of a coloney of arround 60 grey seals. There was entertainment provided to both humans and seals as we watched each other do not a lot.

During WW II Tiree had a large military presence, with over 6000 personel on the island. There are still a number of disused military buildings on the island and whilst walking down the beach we found another memento from the war. After some excavation we were initially worried that we had found some sort of mine but thankfully enquires at the local museum confirmed it to be a submarine buoy. That said, no one was in the mood to throw rocks at it.

The strong wind on Sunday did not let up and in fact picked up a few miles an hour so by the Monday our ferry ended up being cancelled. This caused not a little consternation and we had visions of having to sleep in or under the vans with board bags as sleeping bags, however as the incoming guests at the Hostel were also arriving by the same ferry we were able to stay in the warm for another night. We also therefore had a “bonus day” on the island, though the weather was atrocious with strong winds and very heavy rain. 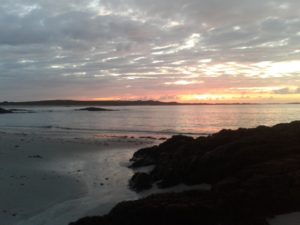 The winds died off mid-morning but the heavy rain persisted. Those who ventured out walking got battered, though late in the day the weather cleared and we were treated to a glorious sunset. 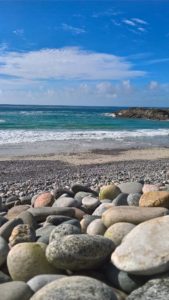 Conditions improved significantly the following day and as the ferry wasn’t scheduled until 7pm we had a glorious day out and about on Tiree. When the weather is good here the views really are absolutely stunning.

We set sail and the ferry dumped us back in Oban at about 11pm. We then had a long overnight drive back to Nottingham, arriving at about 7am, just in time for work. It’s a shame we didn’t get to see the scenery on the drive south from Oban to Glasgow in daylight, but maybe next time….??

A huge thank you to Andy Jameson for superb planning and organisation and to Cliff Seymour for this trip report.