The National Watersports Festival (NWF) took place at the end of August. Formerly an exclusively Windsurf Festival, this year saw the inclusion of Kayaking, Stand-up Paddleboarding and Kitesurfing to the festival. The event has for the last seven years been the biggest mass participation windsurfing event and TWC members again made the trip down to Hayling Island.

For those who have not been to the NWF (why not?), it offers something for everybody. There are trade stands for those looking to top up their quiver, taster sessions for those looking to start in the sport, master blast races for those looking for a bit of friendly competition, competitions from the professionals and clinics from the top coaches in the business. Oh and there is a party each night with a live band or two thrown in. This year the festival started on the Friday with trade stands set up, a couple of clinics and the first evening party. Due to work commitments, I didn’t arrive until late on the Friday night.

This year I decided to take part in the all the racing. The format is very simple: a mass start on the beach, blast out to the mark, gybe round and blast back to the beach and run up to the finishing point. The racing is very informal with people free to compete in as many of six races or as few as they like. Fancy dress is optional. Whilst the format may be simple, the wind didn’t want to play ball for the first race with the wind almost directly off-shore. This made the race more like a course race with an upwind leg to get back to the beach. Having made it round the mark, narrowly avoiding a collision with Santa Claus, I set off on the upwind leg in a race with a giant green beer bottle. 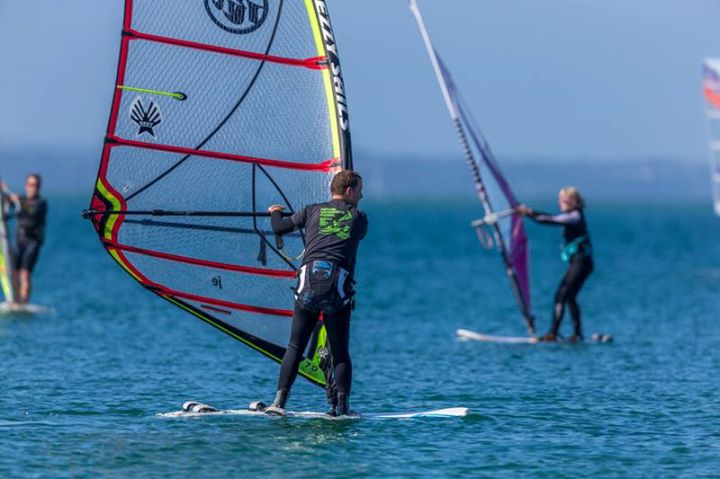 A couple of good tacks and sailing as close to the wind as possible meant a decent finish, 65 out of 215, which wasn’t bad considering I was chugging for quite a bit of the race. The wind switched to give a more cross-shore direction which made the racing a bit easier although a couple of knots more would have been nice. Keep a fairly consistent placing around the mid sixties to seventies gave me an overall position of 56 after four races on Saturday, just missing out on the top 50 night windsurfing competition places.

Aside from the racing, throughout each day are a series of clinics by all the top gurus. Getting 45 minutes from these experts offering advise and fine tuning is worth the entrance fee alone. In between the races I was able to catch a couple clinics from Simon Bornhoft and Jim Collis. The Jim Collis session was similar to the training he did earlier this year for TWC at Rutland. The thing that amazes me about Jim Collis is that even though I have been to a number of his sessions, I always walk away having learnt something new. The Simon Bornhoft sessions was also amazing and finished with him, his board and rig, being lifted in the air performing a series of manoeuvres, including a forward loop on a sea of people. 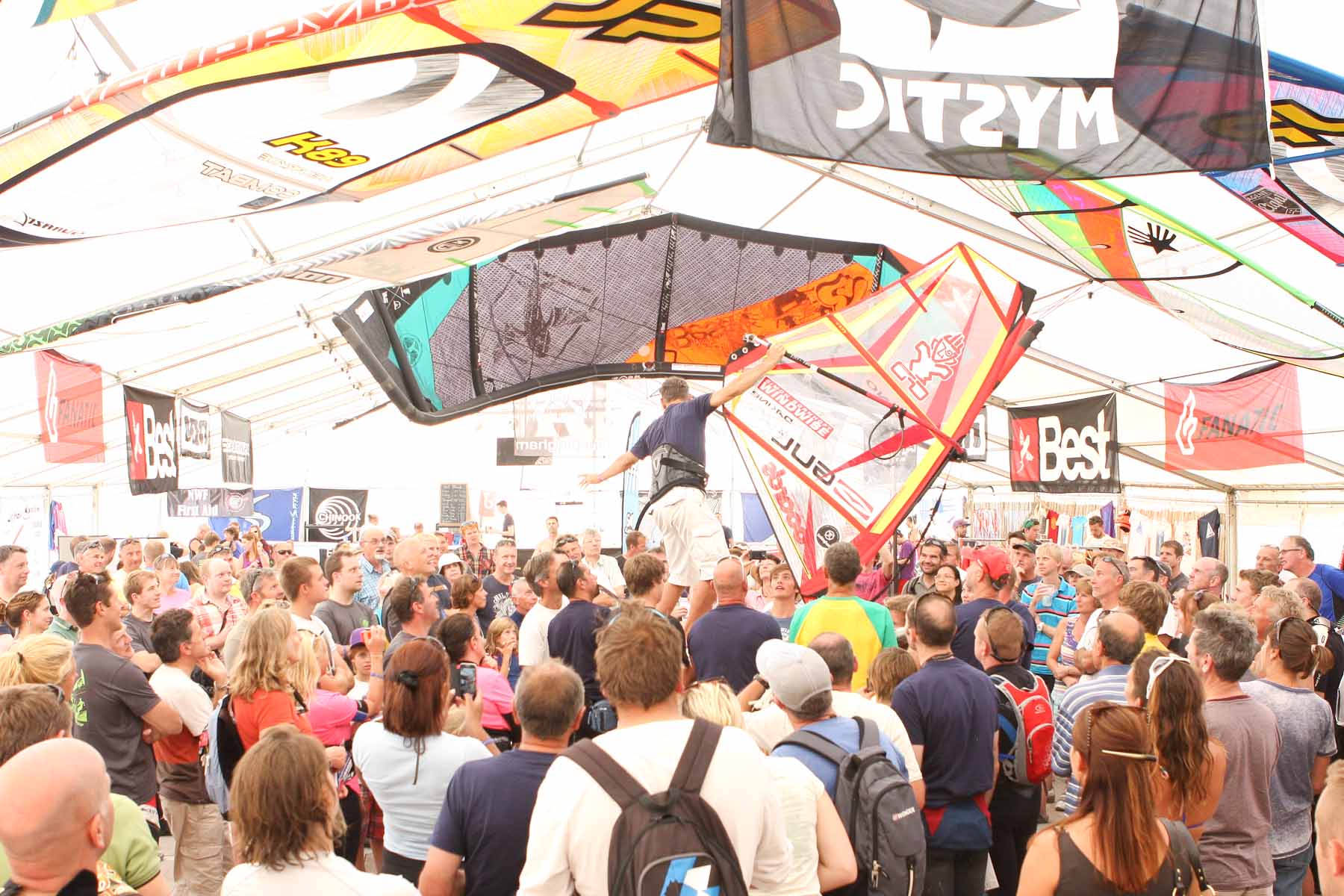 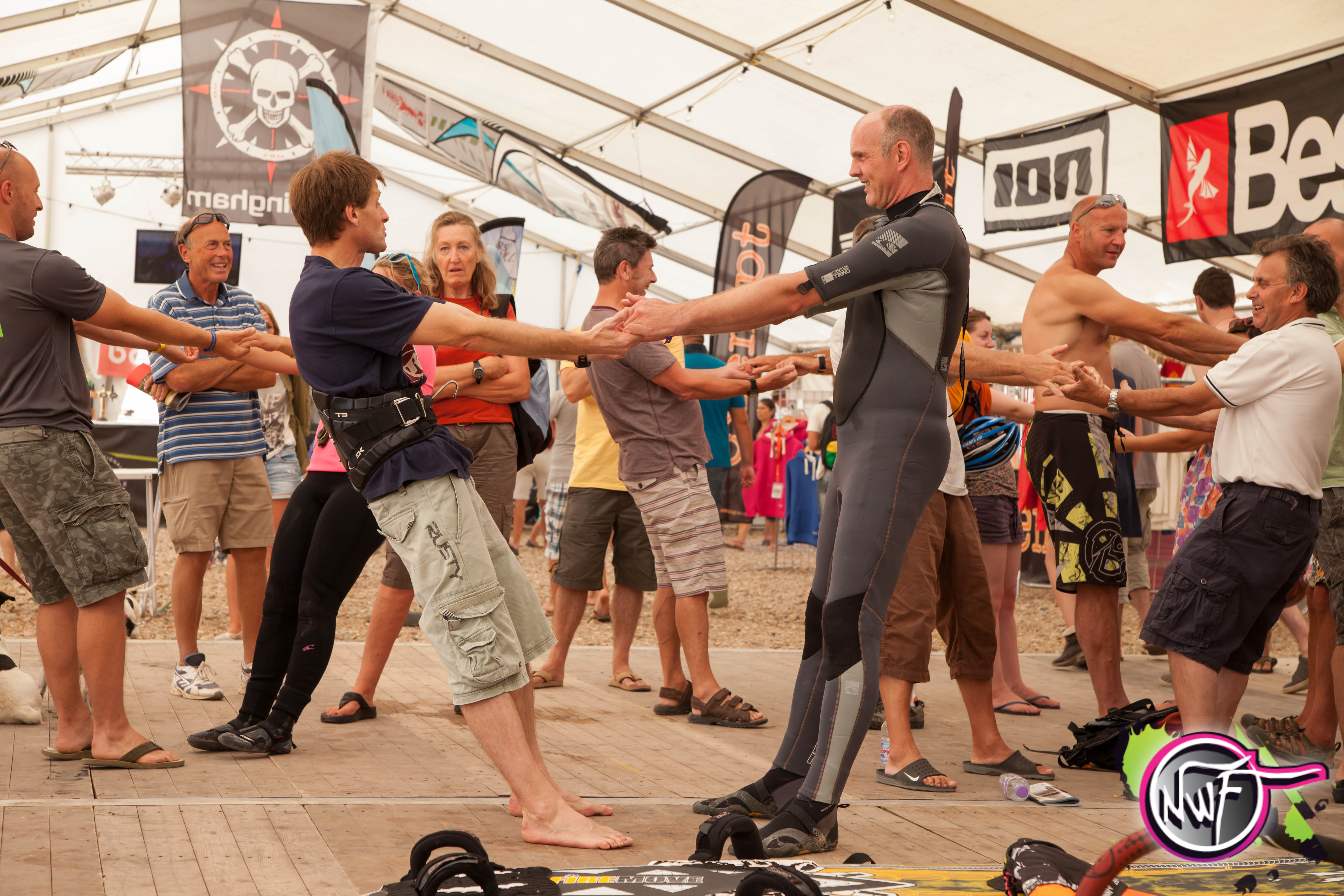 The evening entertainment starts with some night windsurfing including a kids & pros race and then finishes with a pro freestyle competition. This freestyle competition consists of standing on the board with the rig in one hand and a tow rope in the other. A jet ski then tows the competitors round and up to speed before they let go and launch into some aerial manoeuvres, such as a flaka or burner, with the sail and board spinning around before landing in the water. The competition was eventually won by 5 time free-style world champion Gollito Estredo. With the competition over it was back into the marque for a few sherbets with a live band, Hot Betty thrown in. 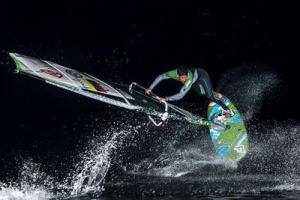 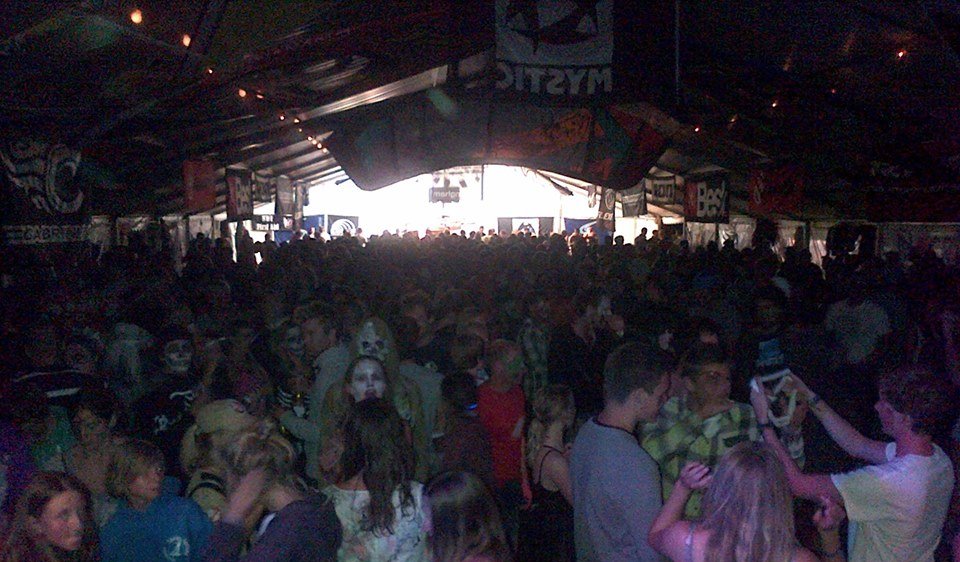 With the effects of the late night party, its fair to say that the first race on Sunday morning is definitely the least well attended. So it’s no wonder that, having dragged myself out of my pit to be on the startline, I recorded by best placed finish! Following the first race, I went on to a clinic by Jem Hall. Watching his clinic I can see how his style can put people off. I however thought his clinic was the best of the weekend. The final action on Sunday was another freestyle competition. This time a bit of old-school freestyle with the young guns showing off a series of sail spinning and board balancing tricks.

All-in-all it was a great weekend with plenty of different activities to keep your interest. There will be another event next year and the club will again be making the trip. And if anybody fancies forming a team of three for the team racing then I’d be in. It doesn’t matter if you chugg along, we’ll just call ourselves the Rutland Belles. And dress in drag! Or maybe not!!