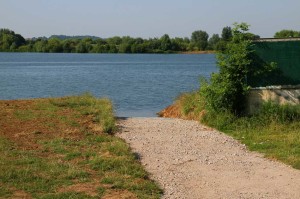 A huge thanks to everyone who turned out on the 22nd June to help with phase 2 of the slipway.

Yes it is over a year since we attempted to do this first time round, but the weather we had on the first day and the rotten summer and winter since then have made it impossible to contemplate having a JCB driving around churning up the grass. Thankfully its dried out and, with the exception of a bit of tidying up, it is now complete.

We had a huge work schedule organised for the day, including making a barrier to prevent nutters driving onto the rigging area and churning it up just for their amusement, and we got the most important bits done. We know the area around the toilets is a bit soggy so we want to address that, plus we need to lay some roadstone in front of the boat lockup, and we all know how poor the track down from the gate is, so……. 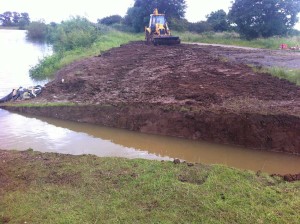 This is how we ended up last year after the attrocious weather on the first attempt.

we are planning another work day on the 2nd August to finish off the construction works, including filling the potholes in the road so we could do with a little more help yet, but its no where near as much as we had to do last time. More information to follow. 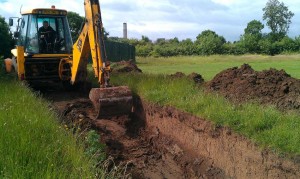 Tidying up the sides.

We had a well organised work programme designed to get the essential tasks completed with scope for doing more if we had a better than expected turnout of labour.

The first task was to bale out the bottom of the slipway and have the digger remove all the soggy clay that had accummulated after the front wall had caved in last year. 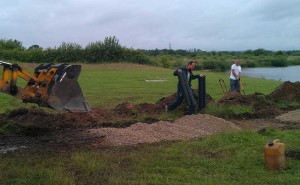 The digger then re-shaped the sides so that we were back to square and level, he then took off the turf back to the road so that the new roadstone base would be level with the grass.

The spoil was dumped on the grass temporarily and moved later, you’ll note we have filled the gap in the hedge used by dog walkers, to try and prevent our rigging area being used as a dog toilet. We live in hope!

Using the digger to transport the roadstone made light work of getting the base laid. We had to backfill to a depth of about 12″ at the lake end because of the depth, but mostly the roadstone was laid about 4″ thick, then whacked down to compact the surface. Its a bit rough and ready but we intend filling the voids with a dry mix of sand and cement to tidy it all up.

The digger then set about chamferring the sides of the slipway. We hope grass will grow on these and the angle is shallow enough to allow people to carry gear from car parking area over to the rigging area. We have laid some grass seed but we need a load more and will set it on the next workday. 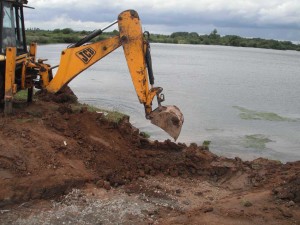 We had hoped to get the digger to drive down into the ramp far enough to be able to scoop out the bed of the lake in front of the dam wall to lower the level somewhat, just to make launching the boat a little easier, but the ground was so soggy the JCB jacks kept sinking and the driver wasn’t happy with the stability so what little could be done was carried out from the side. We will have some more to do on this and it will have to be done manually but it shouldn’t be too much work. 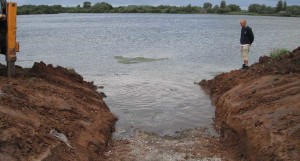 Since we had problems 2 or 3 years ago and then again late last year with idiots driving onto the rigging area and doing donuts just for the hell of it we have suffered from rutting which has made mowing the grass particularly difficult. So we wanted to prevent anyone who isn’t a member being able to drive onto this area. So the plan was to install a number of concrete posts with a fold down driveway post locked in the UP position. 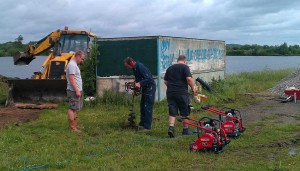 This will have a key the same as the changing room so everyone will be able to fold down the post and drive on.

So for cheapness we decided to cast the posts using the roadstone with added ballast as the aggregate, poured into metre long black plastic tubing. 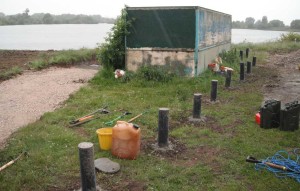 To get these far enough into the ground we hired a post hole borer, which when the ground was soft made easy work of it, but where the ground was dry it was bone hard clay and very difficult to bore to the required depth.

These posts will be cleaned up and fluorescent paint applied to make them visible so no-one drives into them by mistake. 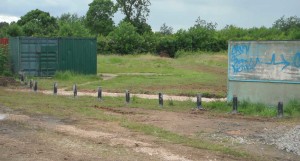 We also cast a number of concrete pads , for the driveway bollards and for 3 mooring points for the boat, one by the slipway and two others by the lake bank. They don’t stick up hardly at all but we will paint them so they are easily visible and hopefully no-one will stub their foot on them.

To complete the groundworks programme for this year we will be  attempting to carry out the following tasks;