Ramp digging. Just about the worst day of they year to do it! 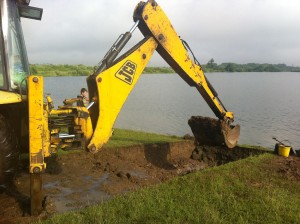 Even though the water level in the lake was very high we have managed to bale out the hole and the digger was making good progress.

After our attempts to dig the ramp by hand we decided to hire a digger.

We booked him on Thursday and then of course we had the heavens open on Friday. When we arrived at 7:15 Saturday morning the ramp area was full of water and the lake  was over the bank, about 60cm higher than normal. We managed to fill the channel with soil and sods and started to bail the water. 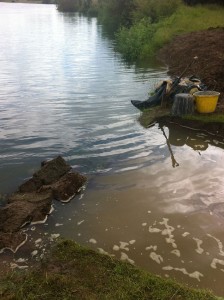 The water broke through the retaining wall and flooded the dig.

…….the digger was just removing the last of the deepest area when the front wall caved in and flooded the whole thing again, this was due to there being such a large head of water, it was like a dam bursting. 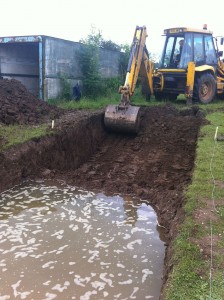 With the dig flooded, the digger backed off and established a new retaining wall whilst digging out the top of the slope.

So the digger had to back out and start above the water level and establish a new retaining wall whilst the top of the slope was excavated. The soil was quite dry here so this made much less of a mess. He temporarliy dumped the soil to the right of the picture and picked it up later and moved it to the main heap. 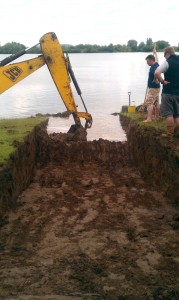 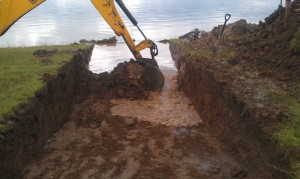 He then tried to do as much leveling as possible under water before breaking through the wall. This was the last part to be removed, however digging under water is a bit hit and miss so we are not sure what we’ll see when we managed to get the water out again. 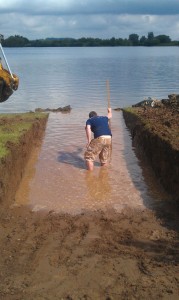 Now we need to wait until the water level falls again so we can create some sort of coffer dam to hold back the water whilst we proceed with the next stage, laying the roadstone. More to follow later……..

Levelling the spoil heap. When we have finished we will grass it again.