As the wind began to pick, one member found the conditions too difficult and got into a spot of bother… 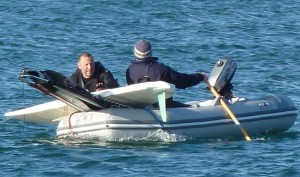 As the afternoon drew on, the wind began to pick up. As Gordon went out, those on the shore noted something amiss with his sail. As he powered up round the corner it became obvious what his problem was. He’d brought a Tushingham mast!

With the mast in two he began to drift out to sea. Lucky he was able to get to one of the boats in the harbour. As he tried to de-rig, he and the rescue boat began drifting down the harbour.

With the kit loaded, the outboard was started up. Only for the shear pin to fail. So the brave rescue crew got out the oars and rowed our Gordon back to dry land.