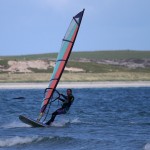 I am driving a mini-bus heading south down the M6 on my way back from Tiree. We are currently just north of Carlisle, travelling at around 60 mph. This is not for any reasons of economy but it’s as fast as we can go due to the limiter, the only down side in my opinion, on what has been a very enjoyable week. However, the leisurely pace gives me plenty of time to reflect on the trip.

When the idea of going to Tiree was first suggested, to be honest I was a bit undecided whether to bother going. However, I had heard good reports about Tiree and it was on my list of places to see. So, once I got the green light from the family down my name went.

Being someone who only gets a chance to windsurf half a dozen times a year, it would only be fair to describe myself as very much a fringe club member. So the first time I met most of the other thirteen club members who were going was at the introductory meeting held to plan the trip. I must admit that I was pleased to see that there were several others going who would best be described as ‘seasoned veterans’ as it turned out that there were at least four of us the wrong side of fifty. We made introductions and it turned out to be a pleasant social evening. 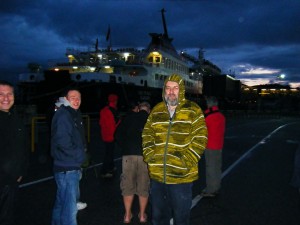 We set off from Nottingham on the Thursday evening in the aforementioned mini bus with two transit vans for the kit. Taking it in turns to drive, we all arrived safely in Oban at about 4 am. It was just getting light but to be fair it had not really got that dark. Once on the ferry we all followed the more experienced travellers to the best lounge for a very welcome couple of hours sleep.

We arrived at the island at about 9 am in glorious sunshine and as we could not check in to the bunkhouse till the afternoon we decided to tour the island. They say that first impressions are everything and the memory of that first tour around Tiree’s many beaches will stay with me for a long time. Blue skies and sea, white sand, and, apart from us, no people. After settling in to the Millhouse Hostel at Cornaig, surprisingly comfortable (Ikea is a good stand-by) we couldn’t wait to get on the water. 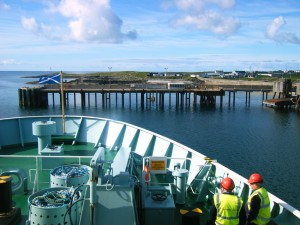 Thanks to the Gulf Stream, we are pleasantly surprised that the sea turns out to be surprisingly warm, certainly for those of us used to the North Sea that is! Tiree has 360 degrees worth of beaches so it can provide wave sailing or flat water blasting, depending on where you go. I must admit that Gott Bay was my personal favourite. Just enough waves to make it interesting but sheltered and big enough to allow good long blasts out to sea. It also had the added advantage of having the island’s only pub, which provided a welcome couple of pints at the end of a long hard day on the water. In addition to a good age range, the club also has a fair spread of abilities. However, with a bit of common sense on your choice of location, sails and board it is fair to say that Tiree offered something for everyone.

So what else did we do? 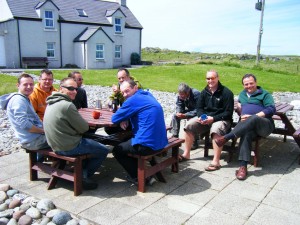 I must admit that a lot of my time off the water was spent eating and drinking.We had some high quality communal meals and also a couple of polypins of Castle Rock bitter had travelled north with us to help wash it down. You can only manage so much McEwans 80/- after all. We also all went for a trip to one of the islands restaurants, The Elephants End for some excellent local seafood and steaks.

On the one day that there was no wind, a few of us went snorkelling down at the local Cornaigmore beach. The water was crystal clear and just about warm enough for those without a hood so we enjoyed a pleasant half hour pretending to be Jacques Cousteau. The only slight disappointment was the lack of largish sea life. Apart from a few small fish there were just a couple of undersize crabs that we left to grow a bit. My own theory for the lack of wildlife is that the local grey seals got there first! After we had dried off, we walked back via the seal colony, located in the rocks at the west end of Balephetrish Bay. We were able to get quite close to them but they were wary enough of us to stay in the water, watching us with interest. 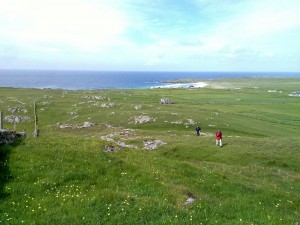 Trying to get a phone signal Frank?

In the afternoon, we decided to take a walk up the local peak of Beinn Hough, which at the dizzying heights of 119 metres is the second highest point on the island. We set off through the machair, the local term for the meadow like grasslands, which covers most of the island. There was quite a wide range of wildflowers including several species of orchids. After about 3 miles or so we reached the summit where we explored the remains of a WW II U-boat detection station. There were spectacular views down the whole length of the island as well as out across the Atlantic, particularly as we were lucky enough to see one of the Tall Ships out at sea. 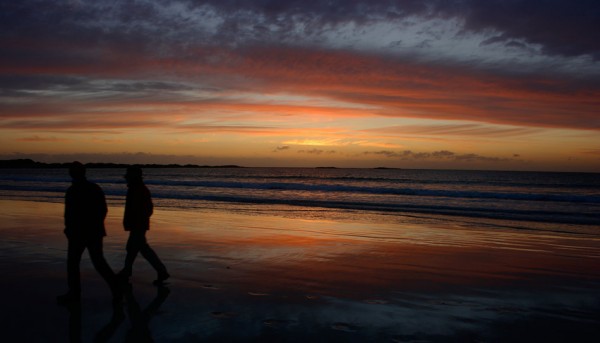 Sunset over the atlantic.

For those interested in birds, Tiree is home to quite a few species and most significantly has the largest UK population of corncrakes. During the walk, there was the constant sound of birdsong from corncrakes, twites, oyster catchers and lapwings. We also noticed that the island had an abundance of brown hares.

So that was our week on Tiree and I am left with a decent tan and thanks to the club photographers, quite a lot of fantastic photographs. Can’t wait to bore the wife and kids!