The weekend of 4th & 5th September saw the 5th annual ‘National Windsurfing Festival’ held at Hayling Island.This is where windsurfing first started about 40 years ago, when a young Peter Chilvers first put a sail onto a board.

These events started as the Fat Face night windsurf festival but after 2 years of sponsorship they pulled out. ‘Sir’ (as he should be for contribution to the sport) Alan Cross, the organiser then dipped into his own pockets for year 3 and still produced a great event. Now, with this 4th the industry has really got behind him in their support and once again he put on a fantastic weekend event for all things windsurfing. 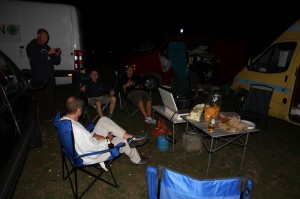 The first of us arrive around lunch time on Friday found the competitor’s car park almost empty so a nice convenient pitch was chosen and the first two vehicles parked up leaving us with a good eating & camp fire gap as we knew with the event being a sell out that parking space would tight. We called Richard (from Nobles) who was already on the island and he together with a friend of his, Simon, brought their vans along to block of our square of land.

We then rigged and went sailing, big kit but a good rolling swell in the sunshine was enjoyed. No need to derig afterwards, we just left it next to our vans and the now rapidly filling car park.
Stu & Laurence rolled up about 7pm in their hired long wheel base Sprinter, this turned out to be one of the biggest vans there. Stu’s good lady, had the night before made a large chilli which we reheated and put with some fresh cooked rice – enough for 7 of us. It was then of to the Inn on the Beach for registration and a few beers. 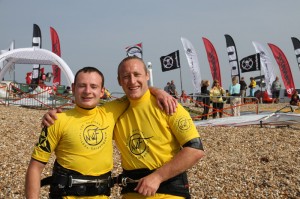 No nerves before the first race

Saturday was warm and sunny but not a lot of wind. Stu & Laurence, both having big boards, competed in the days racing while Gordon, Hywel & Mike watched. Simon borrowed Hywels kit and did well enough within the fleet to be allowed to enter the night windsurfing competition. Around 9pm the night sailors, covered in glow sticks, took to the water. This style of racing is really simple, run into the sea with kit, sail out to a buoy about ½ mile off shore, gybe round it and sail back, once landing you then run up the beach to give your numbered wrist band back. This gives you your position.

After the sailing it was party time and the live band playing in the marquee, it’s when Laurence also managed to lose his hat (last seen on Dave White’s head). 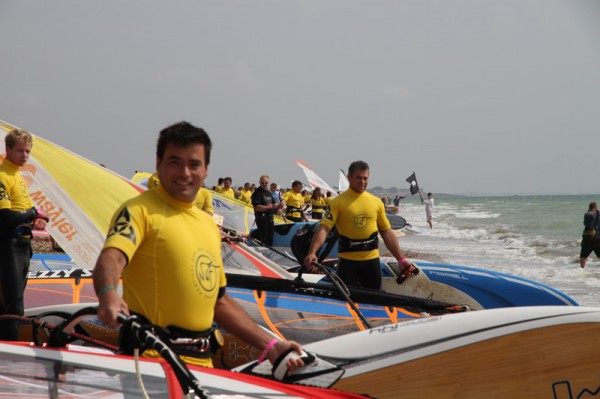 Throughout both day gurus such as Jim Collis, Peter Hart, Dave White, Jem Hall & Ant Baker gave half hour teach ins which a totally free of charge, you just group round them & listen. 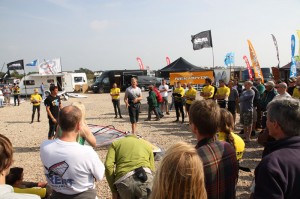 Amy Carter also launched her new website FLOW – For Ladies Of Windsurfing where she is trying to help ladies within this male dominated sport.
There were also loads of trade stands where manufactures were showing their latest offerings, here you could meet the main men behind each of the brands and talk all about the kit available. One stand that drew special interest was a stand showcasing some of the best fins available.  There were some really nice fins on offer there.

Sunday started damp and miserable but by 11am the sun came out and the wind picked up giving brilliant conditions. Simon, again went racing as he was well placed, the rest of us went free sailing. For us lake sailors this started as a challenge with a good rolling swell then if you sailed out far enough some nice breaking waves on the sand bar. 6.5m was about right. We also met up with Richard Holgate, who came to El Tur in May, as it’s his local water. As we were finding the waves and swell a challenge it was good to hear from him that he also found it quite large.

Around 4pm we packed up ready for the drive home. It takes about 4 hours, but is a really easy drive despite being tired from a weekend packed with a full itinerary and good sailing.

We all agreed it was a great weekend and would return next year, we hope more members will be able to join this great outing.

Next years event will be 3rd & 4th September, we are planning on going down on the Thursday and setting up a bbq/cooking area for club members to use.

Well, what an event………..Awesome! Not bragging, but you tell me the events growing from strength to strength each year…… Thank you for all your kind comments from industry and competitor alike…………….I must give you the competitor and whole windsurfing trade a massive thank for supporting the NWF concept………..We have some new ideas for next years event 3-4 Sept 2011. If you want to be kept up to date with progress then why not join the fan page on facebook……….All I ask is for you to persuade your fellow free-ride sailors that this event is all about them so no reason to miss it………….But I do stress that we will not go above the 350 competitors……… Pre-entry will open 1st June 2011

There are lots of photos on the pix page.