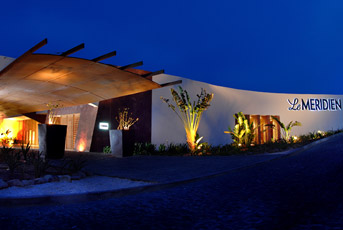 Le Meridian resort lies a mile or so south of the main bay in Dahab and some ½ mile or so down wind of speedy. The hotel stands alone with Club Mistral being the only hire centre at the resort and caters for a maximum of 20 clients. The wind here blows predominately cross shore and being so far downwind of the resort suffers far less wind shadow than the main bay. The beach is mainly desert sand and is steeper than that in the bay and a little rocky once in the water however given the wind direction launch and return is straight off the waters edge. The reach is out and back again in moderate chop however should you prefer the flat waters of speedy then this can be reached within 20 minutes or so after 4 or 5 tacks beating up wind after informing the centre staff of your intentions. Due to the conditions the spot is only really suited to intermediates and above, Club Mistral do not offer beginner lessons & those preferring larger boards will find the choice a little limited however the centre at the Hilton resort cater for beginners. The centre does not have it’s own rescue boat but relies on a radio call to those in the bay. 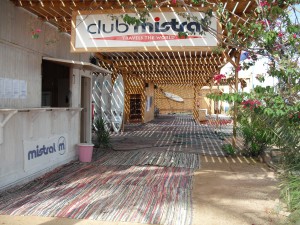 The week I’d booked in April was in jeopardy thanks to the ash cloud and we were lucky to fly out on the first day that UK airports reopened to outbound flights. I’d booked the holiday as a package tour through Thomson and had booked board hire separately through Club Mistral’s on line booking tool. Top marks to Thomson’s on their efforts to get us out which as it turned out worked to our favour as we’d gained an extra 4 hours in the resort. The first few days were really quiet due to effects of the flight bans & I had the centre to myself with only the centre manager to sail with but numbers picked up later in the week to 6 or 7. Conditions were good with wind in the mornings that typically for Dahab drops off in the afternoon. Sail wise 7.3 down to 4.7 was the order of the week however on the day of arrival I was told the centre manager had been waiting for it to drop to 3.5 weather before going out.

The centre manager (Owen) was more than helpful over the week offering plenty of tips, advice and coaching on the simulator. The equipment was in good condition and well looked after and despite the much underrated  Screamer I spent most the time on being a 2008 model it was not suffering from wear and tear.

Le Meridian hotel is widely recognised as being the best in Dahab and despite being nearly empty on arrival still had a full fresh buffet spread on at mealtimes. The hotel and grounds were spotless, rooms well decorated & furnished and grounds as well maintained as you’d expect from a 5 star hotel.

In summary if you are comfortable water starting a sub 110 litre board and your other half / family don’t mind a coarse beach then this is the centre of choice. There are bigger boards available but effectively being a mile off shore of the bay it can get lumpy on anything bigger in anything other than light wind. The beach has a reef just off the water’s edge limiting swimming but there’s a pontoon to take you out past this into clear waters. The hotel stands alone so venturing out requires a taxi or the hotel shuttle into town. More pics to follow in the gallery section.
View Calendar