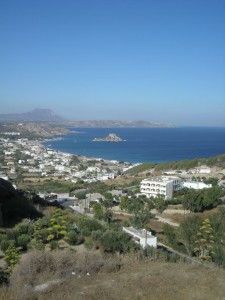 Looking down on Kamari bay from Kefalos old town

Kefalos takes it’s name from the old town that sits on a hill towards the South East corner of Kos over looking Kamari bay. The resort area of the town is largely spread out along the harbour road although some shops and bars can be found along the main road. The road itself runs the length of the island from Kos town in the north of the island only to as far south as Kefalos so is relatively quiet. Kamari bay is some 3 – 4 km along the shoreline with a mixture of sand and shingle beach and a prevailing off shore wind.

Towards the north end of the bay is the F2 center managed by Jens Bartch and is the only one remaining in the bay following the closure of Club Med late in 2007 & the earlier demise of the Fun System center. The center is stocked with a good selection of boards & North sails & rigs. Launching is predominately in a cross off shore breeze that is somewhat affected effected by the hills to the rear however once out in the bay the wind picks up and is much cleaner with water flat making for a reach from the harbour to the island although you can appear to be a long way off shore mid point. Towards the North end of the bay is a gap between the hills providing a boost to the wind and perfectly flat water just where it’s needed to nail those gybes.

During the week I was there in July 2008 it was planing conditions 7 from 7 while on previous visits it has never been less than 50%. Being thermal the wind picks up gradually throughout the day making for ideal conditions for beginners in the morning while after midday the freeriders start to appear in numbers. By late afternoon it was howling on occasion and one of the beach side tavernas makes an ideal retreat to grab a cold beer and watch the center staff take to the water with style.

Kefalos itself is a quiet resort devoid of lager louts and the worst that the British tourist has to offer. Eating out is cheap in comparison to other Greek resorts and there is no shortage of places to enjoy a Greek meal looking out across the Med, Stamatia and Argo are only two of the many good ones that spring to mind. Accommodation is predominantly self catering or B&B & there are no modern high rise chain type hotels. The resort has been getting quieter over the past few years since the big tour companies started to pull out but it does  retain  an element of character. Two Sunbeds and parasol can be rented for as little as 5 euro a day (tip – look out for the Greek lady adjacent to the Sirtaki restaurant, she came down daily with fresh cake made by Greek Mama). The weather? Kos is one of the Dodecanese islands in the Eastern Med – say no more.